Microsoft’s Power Automate Wave 2 expansion has allowed the once niche and cost-effective RPA alternative to transform itself into a strong competitor within the process automation marketplace. Though Microsoft has implemented a number of features, functionalities, and improvements to their product, the price point is extremely competitive when compared to big players in the RPA marketplace like UiPath, Automation Anywhere, and Blue Prism. 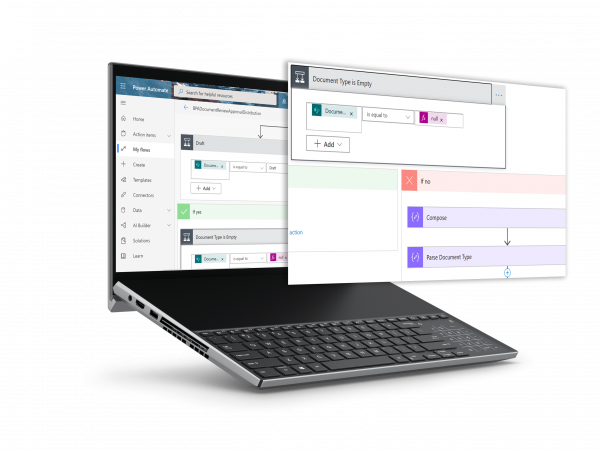 This feature allows makers to perform the following operations for their desktop flows:

Actionable error messages will be available in power automate

In 2020 release wave 2, Microsoft improved Power Automate errors to be actionable by providing guidance on how to fix them. Microsoft will show documentation and community discussions about errors you receive in Power Automate to help you resolve the errors more quickly.

See raw inputs and outputs in the run history

You can select any flow and see the run history for the last 30 days. When you select a particular run, you get an experience similar to the designer, showing the inputs and outputs of each action.

Now, there are new options for Show raw inputs and Show raw outputs for triggers and actions that have run. This is useful if you want to quickly search across all of the different outputs of a particular action. Note that these links will not show up if the inputs or outputs are too large. For larger inputs or outputs, you will need to use the download link to view the results of the action.

This feature provides for the use of sensitive text inputs and outputs to control which variables are stored in the run logs for desktop flows. These fields can be used for exchanging sensitive content like passwords between cloud flows and desktop flows.

Support for IMEs in Power Automate Desktop and web recorders

An IME is a software component that enables a user to input text in a language that can’t be represented easily on a standard QWERTY keyboard. This is typically due to the number of characters in the user’s written language.

With this feature, a user can specify that a text field should be populated with the use of IMEs during a web or desktop recording. The user inserts the text with an IME and the generated action will include the inserted text as part of the automation script.

With this feature, the Power Automate designer and the recorders can use direct encrypted input in the following actions, which provide text input to target fields:

This functionality is available when you manually create or edit a desktop flow. It’s also available through the web and desktop recorders, allowing the user to protect text data that should not be visible on screen.

Along with direct sensitive input, password fields can also accept variables that were defined earlier.

Users will be able to run, view, or modify any desktop flow that is shared with them directly from within Power Automate Desktop in the Shared with me

Admins can regulate the account types that can sign-in to Power Automate Desktop by adding registry entries using a group policy or manually to the user’s device.

Here’s a list of the settings that users can change.

This feature allows users from sovereign and government clouds to use Microsoft Power Automate Desktop.

This feature provides four new analytics reports for desktop flows, including Runs, Usage, Created, and Errors. After you select the report, you can switch the views between cloud flows and desktop flows, switch to view analytics for environments for which you are an admin, and change the time period (up to 28 days) to view. Data is refreshed on a daily basis.

Starting March 2, 2021, users with a work or school account can access and use Power Automate Desktop at no additional cost.

Starting March 2, 2021, users can use their personal Microsoft account to sign in to Power Automate Desktop and automate their tasks.

New and improved management and monitoring for desktop flows

Makers need a consolidated view to see how their desktop flows are doing. You need an overview of your desktop flow runs, flows that use the desktop flows, and the most common errors. This will help you to understand bot utilization, identify error patterns, and troubleshoot issues.

With this feature, Microsoft is launching an assistant for Power Automate to aid in authoring workflows in the form of a Power Virtual Agent bot (PVA bot). Citizen developers can now get assistance to solve the most common workflows scenarios in Power Automate. They can access content in the form of templates, documentation, and community answered questions for their favorite automation tasks.

With 2020 release wave 2, Microsoft introduced an experience similar to the steps used in the condition builder for low code users to filter the rows that a SharePoint list returns. You can add multiple conditions and group them, too. For example, you can request that the list returns only the items that were created yesterday and whose status is approved.

![NOTE] Pro devs can continue to use OData queries from the advanced view.

In 2020 release wave 2, Microsoft introduced contextual help you can use while building flows. With this feature, when you select a connector, you’ll see the documentation, community, and blog post links that are related to the connector that you selected. As you progress through and select a trigger or an action, the right-side pane will be refreshed, and you’ll see the corresponding documentation for the trigger or action that you selected.

Enhanced capabilities in the interaction of desktop recorder and windows

This feature improves the desktop recording experience, so you can capture desktop actions and interactions by using the Start

This feature provides a role-based sharing experience for automations so that multiple people can collaborate on activities, such as editing.

This feature has a citizen developer-friendly interface, enabling any user to create rich automations via recording or by adding pre-built actions as building blocks. Its improved application compatibility unlocks automations for Java, terminal, or complex extraction across webpages on top of the go-to business applications, such as SAP or Microsoft Excel. It is also suited for automation specialists with advanced debugging and error management capabilities.

With these features, you can:

With this feature, you can use the following actions with PDFs within the Power Automate Desktop application for desktop flows:

Microsoft is making the following improvements across desktop flows setup, creation, and configuration.

With this feature, makers can add delay actions wherever they’re needed in desktop flows to give additional time to get the application into the correct state. This can be necessary if the automation or application is sensitive to wait time.

There are many tasks that business can automate using templates such as recruitment and vacation management. Microsoft will provide templates for administrators and makers to build these processes within applications such as Microsoft Teams, allowing them to customize the experiences to fit their needs.

Unlike the current experience, these templates will leverage the “diet designer” – a streamlined way to provide configuration to a template without having to see the full designer experience.

To summarize, the release of Power Automate Desktop along with the features, functionalities, and improvements that Microsoft has implemented since wave 2 began have propelled the tool from niche use cases to being a strong competitor within the RPA marketplace. Improvements such as automation through “action recording” increased the usability. This allows for a higher level of employee understanding and adoption of the tool. Features such as database, teams, and SharePoint integrations (Microsoft Connectors) have increased the appeal of Power Automate. Functionality such as the Chat bot assistant and premade parameter builder allow non-technical users more flexibility and ease in the way they automate their tasks. Additionally, highly technical users will have a greater variety of tools at their disposal.

Microsoft’s Power Automate Software has come a long way since it was introduced in December 2019. The most recent addition of the Desktop version serves to further improve, build upon, and integrate with Microsoft services. The continuous updates and support for the software as well as the high degree of communication from the developers serves to inspire a large degree of confidence in the current and future capabilities of the Power Automate product.

Augmented, Virtual, and Mixed Reality Employee Training
September 15, 2021
Go to Top
We use cookies on our website to give you the most relevant experience by remembering your preferences and repeat visits. By clicking “Accept”, you consent to the use of ALL the cookies.
Cookie settingsACCEPT
Manage consent

This website uses cookies to improve your experience while you navigate through the website. Out of these, the cookies that are categorized as necessary are stored on your browser as they are essential for the working of basic functionalities of the website. We also use third-party cookies that help us analyze and understand how you use this website. These cookies will be stored in your browser only with your consent. You also have the option to opt-out of these cookies. But opting out of some of these cookies may affect your browsing experience.
Necessary Always Enabled
Necessary cookies are absolutely essential for the website to function properly. These cookies ensure basic functionalities and security features of the website, anonymously.
Functional
Functional cookies help to perform certain functionalities like sharing the content of the website on social media platforms, collect feedbacks, and other third-party features.
Performance
Performance cookies are used to understand and analyze the key performance indexes of the website which helps in delivering a better user experience for the visitors.
Analytics
Analytical cookies are used to understand how visitors interact with the website. These cookies help provide information on metrics the number of visitors, bounce rate, traffic source, etc.
Advertisement
Advertisement cookies are used to provide visitors with relevant ads and marketing campaigns. These cookies track visitors across websites and collect information to provide customized ads.
Others
Other uncategorized cookies are those that are being analyzed and have not been classified into a category as yet.
SAVE & ACCEPT
Subscribe
Guides Order Form
Remote Assist Order Form
help you get started
HoloLens 2 Order Form
CONTACT US