Automated Regression Testing – Quality Is Not an Act, It Is A Habit

With the software development lifecycle becoming more complicated by the day, and increasing demand for the delivery of the project, testers need to provide feedback and evaluations instantly to the development teams. Releases that used to happen once a month, now occur weekly and updates are imposed on almost every other day. After every build, there is a need to test as “End-to-End set of business functions that a system contains” – Regression. Given the breakneck pace of new-build releases in the software development life cycle, there is no other choice than to test smarter- not harder in this day and age, with Automated Regression Testing.

The Role of Automated Regression Testing:

By assimilating machines that can meticulously mimic human behavior, the team of testers can move beyond the traditional route of manual testing models and progressively move forward towards an automated and precision-based regression testing.

An automated-powered continuous regression testing platform can recognize the existing system functionality faster and more efficiently than traditional manual testing. When regression testing is automated, it checks into a variety of changes and frees up the testing team to conduct manual exploration into more unusual cases in the production environment. Automating cases that are stable and repeatable allows the testing team to spend more time on testing various environments and for merging more complicated cases together at a higher level. 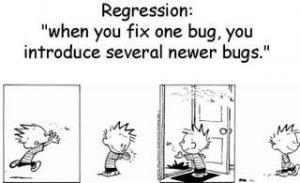 Software development/maintenance is an activity that includes enhancement, error corrections, optimization and deletion of existing features. These modifications may cause the system to work incorrectly. Therefore, Regression Testing becomes necessary. Regression Testing is required when there is:

Ultimately, the regression automation testing solution helps the testing team determine any issues due to the update of the codebase. With the amalgamation of automated scripts, testers can permanently and continually do away with executing test cases manually. Here’s a list of some of the benefits of Automated Regression Testing:

To err is human. Even the most meticulous testers are bound to make mistakes while carrying out monotonous manual testing. This is where automated testing helps by performing the same steps accurately every time they are executed, and never misses out on recording detailed results. The tester can be freed from repetitive manual tests have more time to deal with sophisticated features.

Shared automated tests can be used by developers to catch problems quickly before sending them to QA. Tests can run automatically whenever source code changes are checked in and notify the team or the developers and increase their confidence.

With automated regression testing, one can increase the overall depth and scope of tests, thus resulting in an overall improvement of software quality. Regression test automation can execute a lot of different test cases in every test run providing coverage of all the business functions that are not possible with manual testing.

With software tests being repeated every time source code is modified, manually revising tests can be not only time-consuming but extremely costly. In contrast, once created – automated tests can be executed again and again, with zero additional cost at a much faster pace. With the help of automated regression testing, overall time spent can be reduced from days to mere hours that translate directly into savings.

Since the scripts can be used again, there is no need for new scripts and it ensures consistency i.e. you can perform the same test again using the same script.

It is evident that in the long run, automated regression tests result in cost reduction, time and effort saving, quicker feedback, consistency, and risk-free results, thereby directly contributing an increase in productivity and leading the maximization of profits. Advantages like these contribute to the success of the enterprise. Like the great philosopher once said “Quality is not an Act, it is a habit”, similar to achieve the quality of the system in a faster and coherent manner one has to automate their regression testing manual processes.